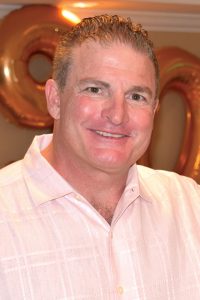 In researching this article each month, I am consistently amazed by the commitment, integrity, and talent that exists in Broward County. Some of the most phenomenal people, committed to advancing the community in which we live, are moving in and around us every day. One such person is Thomas H.  DiGiorgio, Jr. (Tommy).  Tommy is what I would refer to as a “Renaissance Man.”  In the past few years, I have had the good fortune to collaborate with Tommy and experience his leadership, intelligence, common sense, and ability to impact the evolution of Broward County for the better.  This has made me often wonder what makes this person so special and why is he is so committed to Giving Back.

Tommy started his life in Drexel Hill, PA., a community adjacent to Philadelphia and the home of Drexel University. His father was an Architect who emigrated to Lighthouse Point, Florida when Tommy was 13 years of age. His father, Thomas DiGiorgio, built a successful practice in Broward County and produced many notable buildings in our
community. Growing up, his parents taught Tommy a golden rule, “Do unto others as you would have them do unto you.”  This concept matured within him through his years as a high school student at Cardinal Gibbons and as a college student at the University of Florida. Fundamentally, he interpreted it as, be kind, caring, watch out for your
neighbor and help wherever you can. These characteristics are embarrassingly fundamental but in the end are the foundation for making an impact upon the world in which we live. While at Cardinal Gibbons, Tommy engaged in sports, and captained both the football team and baseball team. The only other person I can think of that was
proficient in both sports was Michael Jordan, another individual who has had a positive impact on their community.

Professionally, Tommy is an entrepreneur. He has a 30-year history of real estate and restaurant development. At present, Tommy is a partner and co-founder of an Atlanta, GA based company whose primary business is developing, owning, and operating a series of restaurants with an ever-increasing national presence. Even though this company is based in Atlanta, Tommy maintains his residency in Broward County and continues with an ever-expanding role as a community leader and philanthropist. This is because his home is here. He has a lovely wife, Nathalie, and two children who are at present attending the University of Florida and The Catholic University of America.

What is it that drives a person to commute between two cities and work enormous hours, to find the time be a great parent and Give Back to their community? It started with that golden rule instilled in him by his parents and it continues to this day supported by yet another golden rule that has inspired Tommy in his adult life. A simple poem from Oliver Wendell Holmes, “Greatness is not in where we stand but in what direction we are moving. We must sail sometimes with the wind and sometimes against it – but sail we must and not drift, nor lie at anchor.”  This poem and philosophy are the answer to my question of what drives this person. Tommy is always sailing, and his voyages have had a major impact on Broward County.

Tommy has served civic and governmental agencies representing planning and governmental policy to enhance the quality and efficiency of life in our community. To accomplish this, he has served as Chair of the Pompano Beach Historical Society, Chair of the Greater Pompano Beach Chamber of Commerce, Chair of the Pompano Beach Board of Trade, and is currently the Chair of the Pompano Beach Economic Development Council guiding the renaissance that is currently taking place. His influence now extends beyond the City of Pompano Beach and, as Chair of the Broward County Planning Council, he is influencing the County’s growth and interaction with neighboring counties and the State of Florida, especially as relates to planning for mass transit, sea level rise and resiliency. Two of his most important voyages that are near and dear to his heart are related to his love of humanity and the environment. He is a Co-founder and Director of “Shipwreck Park Pompano, Inc.,” a 501c3 not-for-profit organization that is working to return the basin inside Hillsboro Inlet to its natural state, thus offering the general populace an opportunity to dive and swim while experiencing the marine environment prior to its decline due to massive development. The other is functioning as Director of the Research for the Cure Cancer Foundation. I do not need to expound upon how essential this effort is to our citizens.

As I was completing this article and interview, I received a late email from Tommy. It is so indicative of the kind of person he is and simultaneously a testimony to his success at Giving Back to our community. The email said, “My daughter just reminded me not to forget to mention all the coaching I did as a parent.”  Now that is impactful. In fact, she reminded him of the enormous amount of time from 2007 to 2017 he spent coaching flag football, baseball, and soccer both in Pompano Beach and in Lighthouse Point. I guess in the end the most important things we do might be the simplest. This simple reminder was to me the event that bears testimony to Tommy’s beginnings as a child learning from his parents and especially his architect dad, and the influence they had on how he has conducted himself as an adult.  This has translated to Tommy’s influence on his children and how they are living those simple golden rules passed down through generations that, when followed, benefit us all through Giving Back.