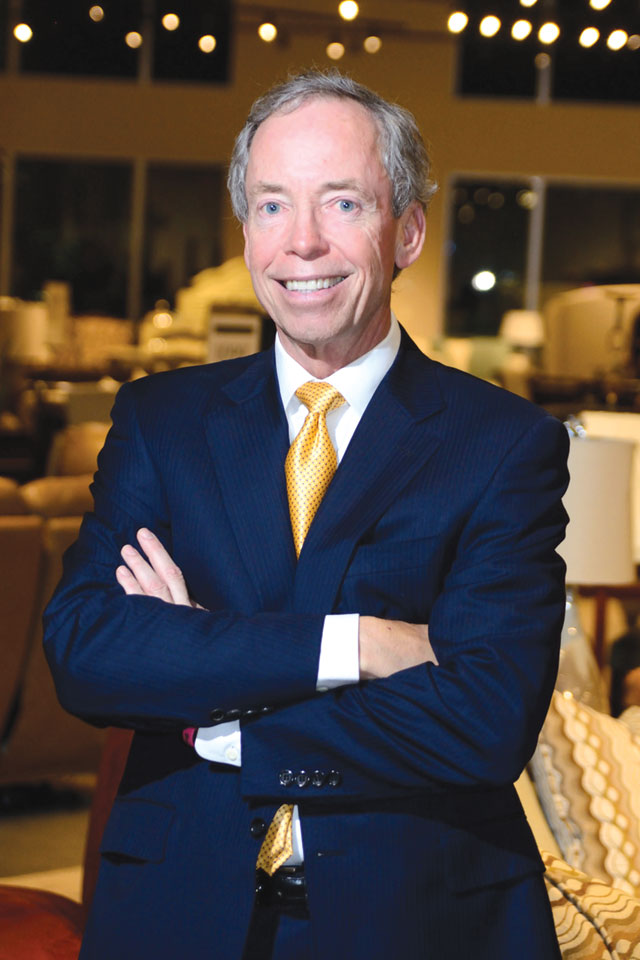 Broward County has evolved a plethora of entrepreneurs and industry giants that have influenced the lives of all Americans. We are a County still in its infancy when compared to most places in the USA, but for good reason we continually produce individuals that are innovative, influential, cultured, and of course my favorite, “Give Back” to their community. In rare instances, the act of giving back goes well beyond the boundaries of Broward County and extends to the State of Florida, the Southeastern United States and, in rare cases, the entire Country.  Keith T. Koenig is an industry giant and that rare case.

One wonders how a person could start a company 50+ years ago, build it to one of the largest and best furniture retailers in the southeast employing over 3000 people in 35 locations, and still find the time to give back on a scale that is unequaled by most. Read on! The company started as a small but popular retail establishment called Waterbed City and evolved into what is known today as City Furniture & Ashley Furniture. After meeting and working with Keith my wonder disappeared and I now understand what drives a person to such success and to so many magnanimous endeavors. Keith is focused, humble, altruistic, moral, inspirational, compassionate and, most importantly, a “man of faith.”  He is successful at touching, giving, and sharing because he has created a work culture that professes his personal character traits. The best way to influence vast numbers of people is to make everyone you employ or meet a believer in the culture of the organization you established. These individuals then in turn become influencers to their network. Keith has accomplished this by creating and propagating a corporate responsibility that “strives to make the world a better place by acting on behalf of the community, the planet and all of its company associates.” The result of this corporate responsibility is an organization that offers Style to the community and is known for being Green Focused and Community Minded.

We would be remiss to not take the time to understand the history of this person and this organization. Keith Koenig is a product of Florida education. In 1973 he received his Bachelor of Science degree from the University of Florida and, being a true Gator, he went on to obtain his Master of Business Administration in 1975. Upon return to South Florida, the true entrepreneur awakened. He joined his brother Kevin Koenig who had started a company called Waterbed City. If you are a Boomer, you probably have very fond and interesting memories of your waterbed. But, like all good “fads,” they tend to fade over time. For some, this would sound a death toll, but for Keith it was a challenge to take head on. South Florida was growing rapidly, and people were relocating from all parts of the Northeast and Midwest. Keith sensed a need to respond by providing interior furnishings that would speak of the lifestyle of our region and to offer them in a manner of style and attractive showroom settings. Hence, in 1994 City Furniture evolved from Waterbed City. Most folks relocating to South Florida would bring their furnishings with them and within a year realize that they just did not fit the vibe and lifestyle they were now living. It is on this realization, coupled with innovative approaches to retail furniture display, manufacture, and distribution, that Keith and his associates built the brand. Today City Furniture is a household word that immediately conjures up images of upscale living framed by affordability. Ask anyone to close their eyes and describe the image they see when you say City Furniture. The result is always the same, crisp white buildings, red accents and that ever present red cupola that so well portrays a sense of “Home.” Keith has obviously built a successful brand but, more important after a person describes a City Furniture building, they will rattle on about one of the areas in which this company has contributed to our community. You will hear about support of Veterans, Public Education, American Cancer Society, Salvation Army, American Heart Association, Junior Achievement, Arc Broward, Urban League of Broward, Career Source Broward, and a list too long to keep mentioning. Keith as an influencer has set a high bar in our community to foster inclusion and diversity because, as a man of faith, he is a living example that open dialogue and self-education of people’s differences yields a society that treats others with respect and dignity.

Our community has a fine history of rewarding people who go beyond what one would expect from its citizens. Keith Koenig is clearly one of the shining stars when it comes to success and community engagement and for that he has achieved an extensive list of recognition that would make most people publicly stand on their laurels. Not Keith, because he is that person described above as humble. He is a living example of the biblical quote that, “He who is humble shall be exalted.”  This humble person has been the recipient of The Nova Southeastern University, H. Wayne Huizenga Entrepreneur Hall of Fame Nomination, University of Florida Distinguished Alumni Award in 2017, was inducted into the Furniture Hall of Fame in 2018, and was recognized as The Ernst & Young Entrepreneur of the Year in 2003. Additionally, Keith was honored by becoming a Knight of St. Gregory by Pope John Paul II, one of his most cherished accomplishments.

When an individual is universally recognized they are compelled to take leadership positions in organizations that provide guidance and oversight to our community, state, and region. To that end, Keith was appointed to and held key positions as Director of the Miami Branch of the Federal Reserve Bank of Atlanta, Vice Chair of the Florida Chamber of Commerce, Chair of the Broward Workshop, and Chair of Holy Cross Hospital, all while serving on the Orange Bowl Committee and the Florida Council of 100.

Yes, Keith is one of our community giants and we could fill this entire issue with his accomplishments, philanthropy and giving back. What is truly of import in looking at the life of this person is the take-away. Life has not always been a “cake walk.”  Keith has endured his share of hardships along with the accomplishments. He lost his loving wife Doreen to cancer in 2015, managed his company and industry through Covid-19 successfully, and has weathered numerous recessions. His constant is those character traits he possesses and knowing that we are all equal in God’s eyes and that we are here to respect and care for one another. Today Keith is re-married to Kelly, has two children and five grandchildren, and his son Andrew Koenig has assumed leadership of the company as its new CEO. In the end, business success is just a scorecard, but the true evidence of a life well lived is giving, not receiving. If you meet Keith by chance or other, you will immediately understand the power of being humble.