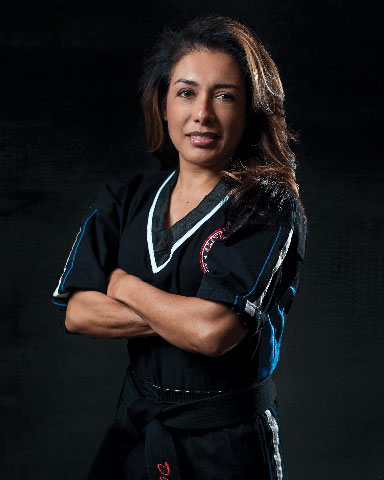 We Americans pride ourselves on strength, ingenuity, creativity, resolve and a passion of caring for each other. These traits are a direct outcome of the individuals who embraced our shores from foreign places. Diana is a contemporary representative of these traits. She is a shining example of a person who chose to leave her homeland, family, and friends in order to embrace the potential of freedom, self-improvement, and the chance to realize her dreams. She left the political turmoil of Colombia for the stability of our American system. A system that places no limits on individual expression. A system that rewards those who are willing to sacrifice and embrace hard work.

Diana was raised in Colombia, South America in a family of business entrepreneurs. Colombia was a wonderful place to grow up and pursue an education. The country is rich in history and an architectural style influenced by Spanish settlers. It was in this environment that Diana pursued her dream of becoming an architect/designer. She attended the university and received a Master of Architecture Degree. Unfortunately, during that time Colombia fell into political unrest and the professional class was scrutinized by the powers in control. Being a person that was determined to pursue her educational dreams, she decided to emigrate to the US, risking that her education and degree status would not be acceptable to its system of licensure. Undeterred, she researched our system of immigration, obtained the appropriate visa status, and arrived in the USA with the intention of cementing her professional status and becoming a citizen.

On that day, she vowed that if she could achieve her goals, become successful and open her own business, she would share her time and wealth by “Giving Back” to the community which supported her journey. Well, the fact that I am writing this article is testimony to her ability to achieve her dreams and to honor her vow.

The journey consisted of having to re-educate within the Florida system of licensure. While she worked as a draftsperson (a subpar position for a person with a Master of Architecture), and a designer, she attended the Art Institute of Fort Lauderdale and graduated Summa cum Laude with a Bachelor of Science in Interior Design. With that in hand, she convinced her employer to offer Interior Design Services, becoming the Director of that division. During this time, she furthered her education and achieved the LEED AP designation from the American Green Building Council and completed the first LEED Platinum Commercial Interior in the State of Florida for the College of Engineering at Florida Atlantic University. With professional experience in her resume, she sat for her professional license designation.

Of course, she passed the exams and became a licensed Interior Designer in the State of Florida as well as a member of the American Society of Interior Designers, ASID. Her journey was almost complete. In 2012, she finalized her dreams and opened her own business, H3 Design, with specialties in Health Care, Hospitality and Higher Education. Operating within her own business entity, she has achieved numerous accolades and awards for her designs and sustainable projects. Diana has been the recipient of awards and publications from the American Institute of Architects, the American Society of Interior Designers, and the US Green Building Council. Oh! Did I forget to mention she married the owner of the architecture firm for which she worked and has two lovely children, lives in Boca Raton and has won awards for the design of her own home. Now that is a determined woman. True to her promise to herself, it was now time to “Give Back.”

Diana focused her time and energy on raising her family, running her business, and performing volunteer services for professional and philanthropic organizations. In the professional world she joined CREW, Commercial Real Estate for Women, where she became an officer and donated her time to helping women achieve status in a world traditionally dominated by men. She offered continuing education programs through her work as the Chair. Additionally, she worked tirelessly for the advancement of her profession, both as a member and officer of the Florida South Chapter of the American Society of Interior Designers, and as a member of the US Green Building Council. In the philanthropic world she equally shines. Diana is devoted to the work of the Catholic Church and specifically the Diocese of Palm Beach. She has served as President of the Council of Catholic Women at St. Joan of Arc Parish in Boca Raton and continues to work on behalf of the World Organization of Dominican Associates, which is an order devoted to conducting the charitable work of the Dominican Order, to praise, to bless and to preach. As you can guess, with two children in public school she immediately was appointed to Chairperson of the Boca Raton Community High School PTSA.

If all this is not impressive enough, Diana decided that she needed to maintain inner strength, mental focus, and discipline, in order to carry forth her daily aggressive schedule. How do you keep an incredibly busy person-focused? make them busier. She was intrigued by the Martial Arts and especially by the potential to advance to higher and higher levels of achievement. Diana enrolled in the Elite Force Martial Arts Program in Lighthouse Point where she rose to the level of Third-Degree Black Belt. Today she continues her work in the pursuit of Ju-Jitsu at the same location.

I opened with my quote from Dickens because it illustrates to us that, at any time there is a potential for the best or the worst, Diana is that shining example of how the best blossoms from the worst of situations. What I find most commendable is that her accomplishments were achieved with respect for our system and “rule of law.” It was this multi-year journey coupled with hard work and dedication to the intricacies of our system that led her to that prized goal, called American Citizenship. It is my opinion that our current immigration climate sometimes places this approach in question.

There is no question in this story. Diana remains a testimony to what Dickens referred to as “the spring of hope and the season of light.”